Tom Carper was born in Beckley, West Virginia and grew up in Danville and Roanoke, Virginia. He won a Navy ROTC scholarship that enabled him to attend Ohio State University and graduated in 1968 with a B.A. in economics. He served three tours as a naval flight officer during a hot war in S.E. Asia and for another 18 years in the Naval Reserve as a P-3 aircraft mission commander until the end of the Cold War, retiring with the rank of captain in 1991. As the Vietnam War was winding down, Tom Carper moved to Delaware in 1973 and went on to earn an MBA at the University of Delaware.

Today, he and Martha, his wife of more than 30 years, live in Wilmington. They are the proud parents of two adult sons. When the Senate is in session, Senator Carper travels daily from Wilmington to Washington. 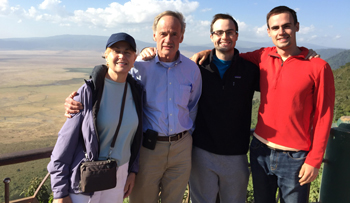 Barely a year after earning his MBA, he was elected in 1976 to the first of three terms as Delaware’s state treasurer at the age of 29. At the time, Delaware had the worst credit rating of any state in America. Six years later, with that credit rating restored to a respectable “AA,” he ran for—and was elected—to Delaware’s at-large seat in the U.S. House of Representatives, unseating a three-term incumbent.

Tom Carper went on to serve five terms as a U.S. congressman, earning a reputation as a results-oriented centrist serving on the House Financial Services Committee, as well as the Merchant Marine and Fisheries Committee, which is now part of the House Committee on Natural Resources. In 1991, encouraged by the administration of George H.W. Bush and many veteran organizations, then-Congressman Carper led a bipartisan, six-member delegation of Vietnam veterans back to Southeast Asia to pursue information on the fate of the thousands of MIA’s whose remains were never recovered. The delegation presented to Vietnam’s new communist leader a roadmap to normalize relations between the U.S. and Vietnam. The spirit of cooperation which followed led to the establishment of diplomatic relations in 1995.

Tom Carper went onto serve two terms as governor of Delaware, beginning in 1993. As governor, he pursued a bipartisan, common-sense agenda that led to eight balanced budgets, tax cuts in seven of those eight years, record growth in employment and a reduction in state debt, all which led to Delaware earning AAA credit ratings for the first time in state history. He also launched initiatives to overhaul the state’s education system, implement welfare reform and preserve public space, enabling Delaware to shine as a model for the nation.

During his second term as governor, Tom Carper was selected by his colleagues to serve as vice-chairman, then as chairman, of the National Governors’ Association (NGA). After serving as chairman, he led the NGA’s ‘Center for Best Practices,’ which focuses on developing and implementing innovative solutions to policy challenges faced by governors and states across the nation. From 1994-1998, he served as a member of Amtrak’s board of directors and, later, as founding vice-chairman of the American Legacy Foundation to combat youth smoking and as vice-chairman of Jobs for America’s Graduates, a national non-profit born in Delaware to reduce high school dropouts in over 30 states.

On January 3, 2001, Governor Carper stepped down two weeks early to become Delaware’s junior senator. He was reelected in 2006, and when Senator Joe Biden stepped down to become vice president in January 2009, Tom Carper became Delaware’s senior senator. With his reelection in November 2018 he has been elected to state-wide public office in Delaware a record 14 times.

In his time in the U.S. Senate, Senator Carper has worked extensively on overhauling our health care system, protecting our environment, and ferreting out waste in federal spending. As a member of the Senate Finance Committee, Senator Carper helped craft provisions in the Affordable Care Act to improve our health care system by reducing costs, getting better results and empowering consumers with the tools and resources they need to achieve better health and wellness. Senator Carper fought to include provisions on workplace wellness and menu labeling in the health care reform law, and he continues to be a leader in fixing the provision of the Affordable Care Act that need to be fixed, while preserving those that should be preserved.

As the top Democrat on the Environment and Public Works Committee, Senator Carper helps lead the fight to create millions of new jobs by reducing harmful air emissions and cleaning up our waterways as the committee’s chairman in the 116th Congress. During his time on the committee, Senator Carper successfully defended common sense clean air and clean water regulations from misguided attempts of the Trump administration to repeal them, and he continues to push for meaningful protections that limit carbon pollution, regulate cross-state air pollution and help stem the tide of climate change while creating millions of clean energy jobs. He led the effort to pass the Diesel Emissions Reduction Act with Sen. George Voinovich (R-Ohio) in 2005, which has cleaned up hundreds of thousands of older, dirty diesel engines to help save lives and improve public health. Senator Carper also helped broker the compromise that created our country’s highest fuel standards in a generation, saving Americans billions of dollars at the pump, and he is helping to lead efforts to extend that progress.

Senator Carper also serves as a senior member on the Senate Homeland Security and Governmental Affairs Committee, having served as the committee’s chairman in the 113th Congress and ranking member in the 114th Congress. In his continued work on the committee, he focused on protecting our country from a broad range of threats to our national security, while helping to lead a government-wide effort to get better results with less money in all federal programs. Senator Carper continues to champion postal reform with the goal of enabling the U.S. Postal Service to remain the linchpin of a mailing industry that employs over seven million Americans. He has also authored legislation that has improved cybersecurity across the federal government and better ensures that we are responding more effectively to the growing threat our country faces in cyberspace.

During more than 30 years of public service, Senator Carper has worked tirelessly to develop practical solutions to real problems. His ability to work across party lines has earned him a reputation for consensus-building that is unique in today’s political climate. The Washington Post’s late David Broder calls him “a notably effective and non-partisan leader, admired and trust on both sides of the aisle.”